Picking up a Wicked Camper in Sydney? Sick! Go explore the beaches and dope hinterland of the Central Coast, get mashed up in the wineries of the Hunter Valley or enjoy the picturesque views of Port Stephens. Avid golf player I hear you say? That’s random. But hey, why not work on your swing in a rainforest golf course on the Coffs Coast, or head up to Byron Bay and chill along the beach with a big fat one. Want to get wet? Yeah dive right in baby, dive right in at the Solitary Islands Marine Park, there’s loads of fish…and they’re colorful. If all that sounds a bit boring and you want to get on it, then head up to the bright lights of the Gold Coast. It’s not for everyone’s taste, but hey if plastic is your thing then check it out. Don’t so I didn’t warn you. But seriously, there’s some beautiful parts to check out. 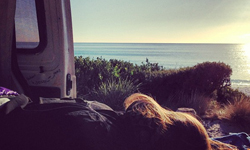 This road trip planner takes you from Sydney to Brisbane, offering rad beaches, chilled villages, cool rainforests, adventure and good vibes along the way. Enjoy our wicked breakdown below (no puns intended).

Take a drive out of Sydney’s northern suburbs to the Central Coast, where you can take a bushwalk in Bouddi National Park, surf it up in Avoca and fish from the beach in Terrigal. Then check out the Coast Walking Track through pretty Bateau Bay and explore the protected beaches and wildlife of Toowoon Bay.

Heading further north, fish and feed pelicans – yep, pelicans. Who doesn’t like pelican’s man, you’ll find ‘em from the ocean beaches of the Entrance. If activities are your thing, there’s plenty of canoeing, waterskiing, sailing, rowing and sailboarding on offer on the Tuggerah Lake.

Heading inland, you can take a ferry or chartered yacht to Brisbane Water National Park, where the bushwalks lead you past some dope Aboriginal art and trippy wildflowers. Trippy wildflowers man.

Drive through Newcastle and stop to surf at Nobby's Beach, take a swim at Bar Beach, get high and go hang-gliding (at the same time) at Dixon Park or scuba dive the many wrecks near Newcastle Harbour. Chill and have lunch at a café along the boardwalk or go check out at Queens Wharf, before heading for a piss up at the vines of the Hunter Valley.

I just love yellow rock. Or if all this sounds lame, head for the sky with a tandem skydiving experience in Cessnock, whhhooooo extreme man.

Take a drive up to the Nelson Head Lighthouse and have a coffee with panoramic views over the bay. From Nelson Bay, you can kayak or cruise next to bottle-nosed dolphins (ahh they’re so cute maaaan) and dive or snorkel with other marine life at Fly Point.

Back on the other side of the bay, walk to the top of Tomaree Headland in Tomaree National Park and roll about it the sand dunes of Stockton Beach. Sand can be a bitch though, be careful where it ends up dudes.

Drive out of Port Stephens and through historic Raymond Terrace on the Hunter River. It’s one hell of a drive man. Continuing up the coast, you can fish and scuba dive from Seal Rocks and walk the beautiful beaches of Forster. Alternatively, head inland to the World Heritage-listed wilderness of Barrington Tops. Take a bushwalk or white water raft through the rainforest and past extinct volcanic peaks. Visit Taree and the dramatic Ellenborough Falls and ride a camel along Lighthouse Beach in Port Macquarie. A little further north, you can dive, snorkel or deep sea fish from South West Rocks and chill out on the white beaches of Nambucca Heads. At the end of the day, rest up in Coffs Harbour, a scenic town surrounded by forests and national parks.

Start your day off with a big brekkie on the beach, take a photo with the famous Big Banana, before checking the larger adventure playground of the Coffs Coast. Kayak through Bongil Bongil National Park or simply hop on a gentle, soothing whitewater raft on the Nymboida River, lol. Alternatively, turn south west for the hippy village of Bellingen and explore the waterfalls and Gondwanan rainforest in Dorrigo National Park. Further north, stop for a coffee in the charming, just charming city of Grafton, ride the dolphins in the Clarence River and take a heritage steam train across the mountains in Glenreagh. Head to Nymboida for whitewater rafting, abseiling and rock-climbing and see the largest platypus colony in the region. Platypus!! You gotta see these sexy bastards. Then rejoin the Pacific Highway and head through the bustling riverfront town of Ballina before arriving in Byron Bay for the night.

Early bird catches the worm right? Take a sunrise stroll along the Cape Byron Walking Track and see the first rays of light turn the Byron Bay lighthouse pink. It’s so mystical man…woahhh mystical. Watch out for whales making their annual migration movements between May and November, snorkel with humpbacks, sea turtles and dolphins in Cape Byron Marine Park. Indulge in a big breakfast in one of Byron’s many thriving cafes, then swim or kayak with dolphins off Main Beach or hit the popular surf break of The Pass. Get high (in both senses) and hang glide over the lighthouse, horse ride in the Bangalow or join a four wheel drive tour through the rainbow-fractured waterfalls and rainforest of Byron’s hinterland. This beach paradise is also the place to get a tarot card reading, get all zen at a rainforest retreat or browse the work of local artists at the Saturday markets. Once your zen has been restored, jump in the car for a scenic 90-minute drive to the Gold Coast. You can make a detour through the national parks around Murwillumbah and climb Mount Warning, an ancient eroded volcano. Volcanoes’ are cool.

Spend the day on the beach, just watch out for bodybuilders and barbie girls (remember, plastic is the word), go spend your dollars on some ice cream and soak up the views along the Gold Coast. Ride the world-class waves of Broadbeach, Kirra and Main Beach. Or lie on the golden sand of Surfers Paradise, where afterwards you can trawl the shops, cafes and restaurants of lively Cavill Avenue. Snorkel or dive the wreck of the Scottish Prince off Main Beach or explore the artificial reef just off Narrow Neck. Head inland and you can explore the waterfalls, rock pools and lush sub-tropical rainforest of Tamborine Mountain National Park, Springbrook National Park and Lamington National Park. There’s also a massive theme park not far away called Sea World, it’s sick! Next door you can watch movies being made at Movie World and survive the mother of all tidal waves at Dreamworld. Once all the fun and games are over, do the hour drive to the gorgeous city of Brissy aka Brisvegas aka Brisbane.